The Ballad of Songbirds and Snakes - Review 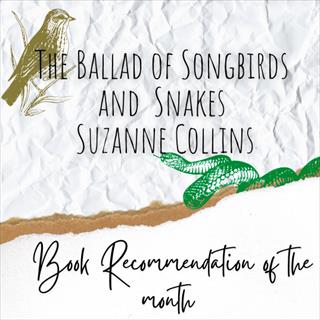 Are people born evil or do they become evil? Find out in the Suzanne Collins’ Hunger Games Prequel.

This long-awaited novel by Suzanne Collins features an 18-year-old Coriolanus Snow living in The Capitol during the year of the 10th Hunger Games. Fans will remember the psychotic President Snow who rules over Panem and controls the Hunger Games, but get ready to see him in a whole new light in this origin story.

The Capitol 60 years before Katniss Everdeen experiences it for the first time is a very different place. Instead of riches and luxury there is famine, poverty but more importantly there is nobody celebrating the Hunger Games. In fact, the Hunger Games are a rather sombre affair in which 24 tributes, 2 from each district, are placed in an amphitheatre that has fallen into disrepair. There are very few cameras, no prizes for winning and no Ceaser Flickerman to lighten the mood. With no obsessed Capitol audience there is no money coming into the Capitol which is the problem that Coriolanus and his class are asked to solve.

Coriolanus suggests that they allow the audience to bet and send ‘gifts’ directly into the arena to the tributes. He also says that they should give the winning tribute and their districts prizes in an effort to encourage better and more prepared tributes to volunteer. He rationalises the games as a necessity and claims that these changes will make the games more exciting. He lightly masks the horror of murdering children in the guise of it being a game for the Capitol residents.

But is Coriolanus inherently bad? At the end of the day he only makes all of these suggestions to give him and his family the chance of a better future. Living constantly in fear of being evicted from his house and starving, he does what he needs to do in order to survive.

Coriolanus faces the same problem that every single tribute is asked to face: Can you morally kill another person to save your own life. If your answer is no then is Katniss Everdeen, who also answered yes, any better than President Snow?